National Railway Museum opened in Shildon in September 2004 and links with the existing Timothy Hackworth Museum. The Museum provides an opportunity to view the history of the railways and one exhibit on show will be Sans Pareil – the pioneering locomotive built by Hackworth in Shildon in 1829.’ 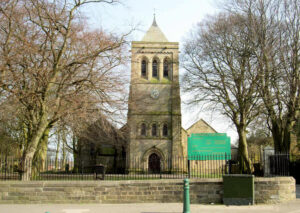 St. John’s Parish Church, at the end of Main Street was opened on Sunday, 29th June, 1834. On the foundation stone, laid during 1833, is the following inscription, now almost obliterated: ‘Mine house shall be called a house of prayer’. The Church when completed, was a Gothic Structure, consisting of chancel, nave and a square tower containing two bells.

The re-building of the Church was completed in 1882, when amongst other changes, a new organ was installed. The Church surrounded by trees, consists of nave, two aisles, chancel and handsome west tower, an addition completed in 1902. of stone in the Early English manner, the tower has two sets of Lancet windows and is capped by a short conical steeple.

Close outside the parish church, at the end of Main Street is the War Memorial, a stone plinth surmounted by a statue of a soldier and with plaques bearing the names of Shildon men who fell in two world wars and in the Korean campaign. The Unveiling & Dedication took place on Sunday, 2nd June, 1957. 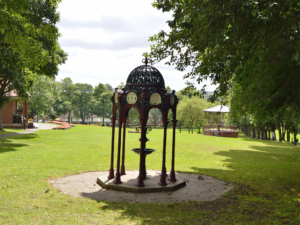 Shildon boasts one of the finest parks in South West Durham, known locally as the’ recreation ground’.

It was opened on Saturday 28th September 1912; an occasion marked by much celebration including a “massed assemblance” of some 3,200 schoolchildren who gathered in the Market Place, together with horses, cyclists, pit ponies, the fire brigade, ambulance parties, the RAMC, representatives of miners’ lodges, Scouts, and two bands – The Wesleyan Band (which became Shildon Town Band) and the Temperance Silver Band. They marched along Church Street, Main Street and Byerley Road, into New Shildon, and along Adelaide Street into Alma Road arriving at the Recreation Ground via St. John’s Road.

On August 30th 1913 the Bandstand was officially opened to the assembled population by the town councillors ‘amid much ceremony and many speeches,’ and the LNER band played to the audience seated around the perimeter. 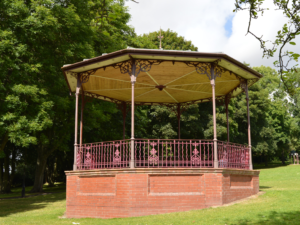 The Committee of the Old Shildon Workingmen’s Club placed an order with Darlington iron mongers Croft & Hall, in 1913 for a drinking fountain, to be situated in the park for the enjoyment of the people of Shildon, at a cost of £124 – 9s – 11d. This had a grand ornate canopy set upon iron pillars on a stone base, with a centre column beneath the wide bowl upon which rested the fountain head formed by a tube surrounded by herons. Drinking was by means of tin cups hung from chains upon the central structure, but these were removed sometime later during a scarlet fever outbreak.

Around the cast iron canopy are arranged circular plaques commemorating the sponsors, and remembering Shildon railway heritage. At the presentation of the fountain to the people of Shildon in 1914, only two official representatives of the Workingmen’s Club were permitted to be present amongst the councillors and invited dignitaries.

The most spectacular piece of municipal ironwork in this area is the Walter Macfarlane and Company octagonal fountain in Shildon Hackworth Park. The ornate fountain, which carries the name of Macfarlane’s Saracen foundry on its legs and a picture of Hackworth’s Royal George engine around its top. It says it was “Presented to the inhabitants of Shildon by the members of the Old Shildon Workmen’s’ Club, November 1914”. 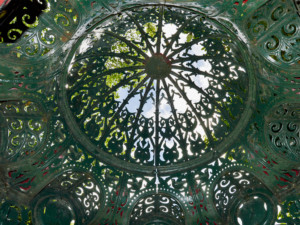 1924 saw the addition of a fine building, later known as the ‘Rest House’, which was built from local miners subscriptions for the enjoyment of the people of Shildon. 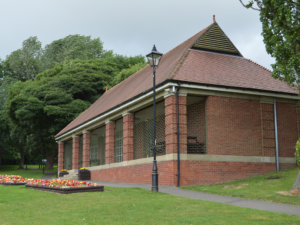 In 1941 the iron railings surrounding the park were taken down and given to the war effort, but the gates still survive, as does the drinking fountain and band stand, but gone are the two shelters and the public toilets which stood in the grounds. The rest house, used for many years as a meeting place for the elderly was vandalised in the 1990s and lay in semi ruin but was restored in 2004 to its former glory. A statue of Timothy Hackworth, which stood on a plinth proudly overlooking the park, was also vandalised in the 1960’s and was broken beyond repair, a new statue was erected in its place in 2003. 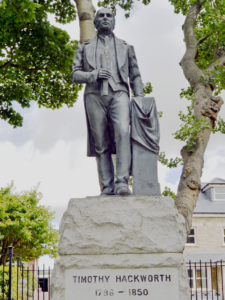 Surrounding Country
Teesdale, Weardale and the Derwent Valley offer some of the highest, wildest and finest scenery in England with attractive North Pennine villages like St. John’s Chapel, Stanhope, Wolsingham, Middleton in Teesdale and Romaldkirk. There are more waterfalls on the River Tees and its tributaries than any other river in England and just to the west of Middleton in Teesdale, High Force is the most majestic. Moreover, only twenty miles or so to the east is the Durham Coast, with several attractive resorts within comparatively easy reach.

Bishop Auckland
Lively old market town, the older part of the town had a large marketplace that leads to the gates of the splendid palace of the Bishops of Durham, Auckland Castle with its magnificent private Chapel built in 1665.

Durham
The County town and a very fine city that was prominent in history as a ‘buffer’ against Scottish raids and as a stronghold of the princely Palatine Bishops. The older part of the city is set on a great loop of the Wear which here is in a deep chasm spanned by several bridges. The old streets are full of interest, and the magnificent Norman Cathedral is regarded as one of the finest in the world. The twelfth century north doorway is dominated by a brass sanctuary knocker, an evil head with a giant ring in its mouth.

Darlington
The nearest ‘big town’ to Shildon and a major industrial centre but with pleasant facets to its nature that include a fine shopping centre and market; beautiful parish church and some of the most colourful and well cared for parks in the County. Also of interest are several museums, Darlington Museum, devoted to local social and natural history; and Darlington Railway Museum, with several historic engines Locomotion and Derwent and rolling stock.

Barnard Castle
A pleasant and typically Northern market town, built of grey stone and almost on the County border. Interesting Church; ruins of historical twelfth century Norman castle on the cliff above the river Tees, reached from the Market Place and, on the edge of the town, the splendid Bowes Museum, a French style chateau set in attractive gardens, Built in the late nineteenth century to display the works of art collected by John Bowes and his wife, this museum is one of the finest in the County.

Binchester Roman Fort
Interesting for the remains, of the Roman fort and village of Vinovia. The house of the Fort Commander includes the best example of a Roman military bath-suite in Britain. Finds from the excavation are displayed in the Bowes Museum.

We are local people in the Shildon area of County Durham whom have established this group with the aim of restoring the historic Brusselton Incline and associated bridges, Brusselton Incline is an ancient monument so too is the Accommodation Bridge. Brusselton Incline over the years has been left to decay and become overgrown with weeds and shrubs, our group intend to clear the vegetation and reopen the Incline as a footpath. Accommodation bridge was badly damaged in July 2013 when thieves stole stone from the bridge, leaving the bridges future uncertain.

Our group has been established to save, preserve and promote the route of the 1825 Stockton & Darlington Railway from Brusselton to West Auckland, including restoring the listed ancient monuments and structures; whilst promoting the historical and educational importance of the route to the area.
Brusselton Incline Group contact details:

The Friends are a group of people who care deeply about the railway heritage of the area and want to see the 1825 Stockton & Darlington Railway line receive the recognition and the protection it derives as the world’s first steam powered passenger railway from which all passenger railways across the world developed.

To work with statutory, non-statutory and voluntary bodies to identify, preserve, promote and develop the 1825 Stockton & Darlington Railway line as an educational, cultural and historic site of International significance and to develop its recreational, economic and tourism potential.

3. Aims and Objectives of the Friends

We are a social historical society centred around Shildon, and maintain an archive of photographs, documents and artefacts.

The objective of our society is to preserve the history of our town for future generations, and to make our archive accessible to as many people as possible for enjoyment, education and for the purpose of academic research.

Our photographic and document archive is accessible by appointment. We can also provide slide and photographic shows. We are not a genealogy organisation, and do not carry out family research.

We meet weekly Thursday at Wesleyan Methodist hall off Main Street on Thursday evenings between 7.30 and 9.00pm There is a £1.00 subscription charge.